Sign Up on QForum Doubt Solving Platform Now! SSEI QFORUM is a doubt-solving knowledge-sharing community where we all brainstorm to crack the toughest questions. You don’t just get access to expert solutions by seasoned SSEI faculty, but also get to level up with your global peers!

Lost your password? Please enter your email address. You will receive a link and will create a new password via email.

Sorry, you do not have a permission to ask a question, You must login to ask question.

Please briefly explain why you feel this question should be reported.

Please briefly explain why you feel this answer should be reported.

Please briefly explain why you feel this user should be reported.

With markets flooded with IPOs these days, that’s something that we get to hear more often than not!

Whenever there is a hot IPO in the market, you will always find a bunch of disappointed investors who apparently “didn’t receive any allotment”. On the other hand, the companies raising funds (quite often) do not get the actual listing value due to fear of under-subscription and lower price bands quoted by underwriters and book runners.

Is there a way which can resolve both the issues above?

Voila! I introduce you to the concept of SPACs!

Hello everyone, I am CA Subham Agrawal, a qualified Chartered Accountant, a CFA Level 2 candidate and a working professional with 3+ years of corporate experience, presently working at Morgan Stanley as Senior Associate in the Institutional Equity division. While my work is demanding and my CFA studies keep me on the edge, I have always been intrigued by new ideas and concepts, and enjoy digging deeper to broaden my knowledge base. Of late, I’ve been intrigued by the concept of SPAC, and today, I take this opportunity to share my research, understanding and views on the same. Hope this article provides all QForum readers some much needed insight on a topic making headlines every now and then!

SPAC –Special Purpose Acquisition Company-– is a fancy alternative to IPO which has been around for decades, but have recently resurfaced & gained fame. A whopping 83 billion dollars have been raised in 2020 alone, which exceeds the total raised over the entire trailing 10-year period –where a total of 47 billion dollars were raised.

SO WHY ARE SPACs GETTING POPULAR NOW?

There are a number of reasons– one of them being the Covid-19 pandemic of 2020– which has led to increase in savings of retail investors, financial institutions including Hedge Funds are using more leverage than ever due to reduced interest rates….and companies going public are afraid to launch their IPO directly to avoid any uncertainties. Also, when a model gets success in the market, many people try to replicate the model in hope of getting the same success. With big names such as Draft Kings Inc, Nikola Motors, Virgin Galactic Holdings, Vivint Smarthome Inc and many more getting successfully listed through SPAC route, many SPACs have given really good returns.

IS SPAC REALLY THAT GOOD?

To get the answer, let us understand what SPAC is. SPACs are blank cheque companies floated by Sponsors. Sponsor is a person with expertise in a particular field or industry which will set up a shell company with no assets and no core operations. This company will be listed at the stock exchange with the name of the SPAC. Now the Sponsor will raise money through prospective investors on the basis of his skills to find attractive companies who wish to go public. All investors who have faith in the skills and integrity of the Sponsor will invest in the SPAC and then the SPAC will look for potential companies which want to go public.

Generally, a target company is selected before creation of the SPAC. The target company will be an established private company with good fundamental values and a well known brand in the market (say Nikola/Airbnb). The Sponsor attracts investors by presenting attractive opportunity and growth potential post acquisition of the target company at present valuations.

TADA!! The private company is now listed without going through the long traditional IPO process! 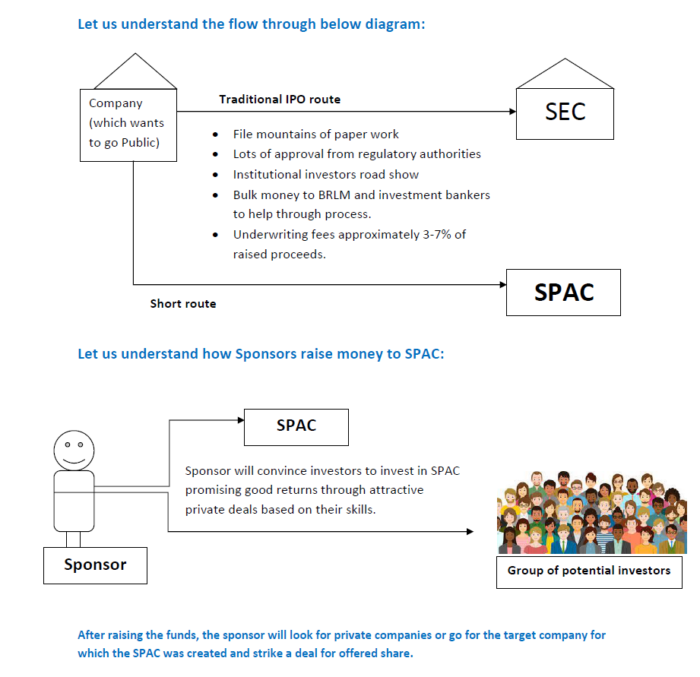 WHAT DOES THE SPONSOR GET IN ALL THIS?

Sponsor takes 1/5th shares of the SPAC by paying a nominal amount!!

IS IT REALLY WORTH GIVING THE SPONSOR 1/5TH OF YOUR INVESTMENTS?

Here comes the tricky part of SPAC–if the SPAC is successful, it may generate sufficient return to cover your desired return even after covering the Sponsor’s share. But if it doesn’t…..

IF SPACs ARE SO TRENDING, WHY HAVEN’T WE SEEN ANY SPACs IN INDIA YET?

Well, that’s a million-dollar question and the answer to that is an interesting one at this stage—

Indian start-ups are also going to be listed through SPAC–but unfortunately not in India. As per CNBCTV18– “Think Elevation Capital, a newly formed entity, launched by Elevation Capital’s Ravi Adusumalli and Think Investments’ Shashin Shah– has filed for a $225 million IPO with the SEC, as per filings from March 19 2021.”

The above SPAC will focus on Indian technology-based start-ups and as per Livemint.com, big names like Swiggy, UrbanClap, etc are potential targets.

Enlisting some benefits of SPACs below:

The concept of SPACs do border on some grey areas too, which is why it’s important for one to consider carefully before getting involved:

As mentioned in an article in Financial Express, Abhishek Goyal, Co-founder, Tracxn was quoted saying “India should also build a vehicle like SPAC to support Indian registered companies or a provision that if you merge with a US SPAC, then there will be no tax event. The Indian market has been more conservative in its approach and has been tightly regulated but this is the innovation they should adopt,”.

So, are you excited??  I’m sure you must be……But don’t forget to do due diligence & risk management before investing.

To conclude, we can say that no financial model or tool is bad unless it is used with fraudulent intentions. As we know, CDOs or CLOs were not ‘bad’ tools per se, but they were used in such a way that it led to the 2008 crisis. The world is full of finance intellectuals who are constantly putting their brains (both in positive & negative ways) for creating new financial tools & vehicles to attract investors.

IT IS UP TO THE INVESTORS AND ALL STAKEHOLDERS TO TREAD WITH CAUTION!